Home > Container security: How to differ from the traditional

Home > Container security: How to differ from the traditional

Container security: How to differ from the traditional

Containerisation in the industry is rapidly evolving

No, not shipping containers, but cloud containers. Fortune 500 organisations all use containers because they provide portability, simple scalability, and isolation. Linux distros have long been used, but this has since changed. Microsoft has now started to support Windows-based containers with Windows Server 2016 running on Windows Core or Nano. Even with a lot of organisations using containers, we are still seeing a lot of them reverting back to how security was for traditional VMs. If you already know anything about containers, then you probably know about Kubernetes, Docker, Mesos, CoreOS, but security measures still need to be carried out and therefore this is always a good topic for discussion. Hardened container image security comes to mind first, because of how the image is deployed and if there are any vulnerabilities in the base image. A best practice would be to create a custom container image so that your organization knows exactly what is being deployed.

Developers or software vendors should know every library installed and the vulnerabilities of those libraries. There is a lot of them, but try to focus on the host OS, container dependencies, and most of all the application code. Application code is one of the biggest vulnerabilities, but practising DevOps can help prevent this. Reviewing your code for security vulnerabilities before committing it into production can cost time, but save you a lot of money if best practices are followed. It is also a good idea to keep an RSS feed on security blogs like Google Project Zero Team and  Fuzz Testing to find vulnerabilities.

Infrastructure security is a broad subject because it means identity management, logging, networking, and encryption.

Controlling access to resources should be at the top of everyone’s list. Following the best practice of providing the least privileges is key to a traditional approach. Role-Based Access Control (RBAC) is one of the most common methods used. RBAC is used to restrict system access to only authorized users. The traditional method was to provide access to a wide range of security policies but now fine-tuned roles can be used.

Logging onto the infrastructure layers is a must needed best practice. Audit logging using an API cloud vendor services such as AWS CloudWatch, AWS CloudTrails, Azure OMS, and Google Stackdriver will allow you to measure trends and find abnormal behaviour.

Networking is commonly overlooked because it is sometimes referred to as the magic unicorn. Understanding how traffic is flowing in and out of the containers is where the need for security truly starts. Networking theories make this complicated, but understanding the underlying tools like firewalls, proxy, and other cloud-enabled services like Security Groups can redirect or define the traffic to the correct endpoints. With Kubernetes, private clusters can be used to send traffic securely.

How does the container store secrets? This is a question that your organization should ask when encrypting data at rest or throughout the OSI model.

Runtime security is often overlooked, but making sure that a team can detect and respond to security threats whilst running inside a container shouldn’t be overlooked. The should monitor abnormal behaviours like network calls, API calls, and even login attempts. If a threat is detected, what are the mitigation steps for that pod? Isolate the container on a different network, restarting it, or stopping it until the threat can be identified are all ways to mitigate if a threat is detected. Another overlooked runtime security is OS logging. Keeping the logs secured inside an encrypted read-only directory will limit tampering, but of course, someone will still have to sift through the logs looking for any abnormal behaviour. 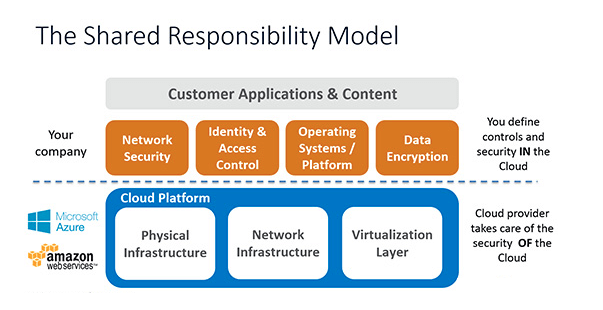 Whenever security is discussed an image like the one shown above is commonly depicted. When it comes to security, it is ultimately the organization’s responsibility to keep the Application, Data, Identity, and Access Control secured. Cloud Providers do not prevent malicious attackers from attacking the application or the data. If untrusted libraries or access is misconfigured inside or around the containers then everything falls back on the organization.